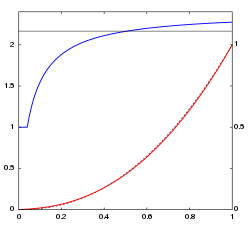 Trying to do a linear interpolation along a nonlinear curve doesn't work very well. Instead, you're supposed to linearize your color values, transforming the sRGB curve to the linear RGB curve before doing your operation, and then transforming it back into the sRGB curve. This is gamma correction. Here are comparisons between gradients, transitions, alpha blending, and image resizing done directly in sRGB space (assuming your browser complies with the W3C spec) versus in linear RGB:

The amazing thing here is that the W3C is entirely aware of how wrong CSS3 linear gradients are, but did it anyway to be consistent with everything else that does them wrong. It's interesting that while SVG is wrong by default, it does provide a way to fix this, via color-interpolation. Of course, CSS doesn't have this property yet, so literally all gradients and transitions on the web are wrong because there is no other choice. Even if CSS provided a way to fix this, it would still have to default to being wrong.

It doesn't help that we don't always necessarily want the correct interpolation. The reason direct interpolation in sRGB is wrong is because it changes the perceived luminosity. Notice that when going from red to green, the sRGB gradient gets darker in the middle of the transition, while the gamma-corrected one has constant perceived luminosity. However, an artist may prefer the sRGB curve to the linearized one because it puts more emphasis on red and green. This problem gets worse when artists use toolchains inside sRGB and unknowingly compensate for any gamma errors such that the result is roughly what one would expect. This is a particular issue in games, because games really do need gamma-correct lighting pipelines, but the GUIs were often built using incorrect sRGB interpolation, so doing gamma-correct alpha blending gives you the wrong result because the alpha values were already chosen to compensate for incorrect blending.

In short, this is quite a mess we've gotten ourselves into, but I think the most important thing we can do is give people the option of having a gamma correct pipeline. It is not difficult to selectively blend things with proper gamma correction. We need to have things like SVG's color-interpolation property in CSS, and other software needs to provide optional gamma correct pipelines (I'm looking at you, photoshop).

Maybe, eventually, we can dig ourselves out of this sRGB hell we've gotten ourselves into.